At least five people have been killed in post-election violence in Kenya after opposition leader Raila Odinga claimed “massive” fraud in Tuesday’s vote.

Two people were shot dead in the capital Nairobi on Wednesday, said the city’s police chief Japheth Koome, claiming they took advantage of the protests to steal.

At least one more person was shot dead earlier in the day in South Mugirango constituency in Kisii County, around 300km west of Nairobi, during a clash with the security forces, according to Leonard Katana, a regional police commander, the AP news agency reported.

In the southeastern Tana River region, police said five men armed with knives had attacked a vote tallying station and stabbed one person to death.

“Our officers killed two of them and we are looking for others who escaped,” said regional police chief Larry Kieng.

“We have not established the motive yet, we don’t know if it is political or if it’s a criminal incident but we are investigating and action will be taken.”

In the port city of Kisumu, the hometown of Odinga, police used tear gas and shot at supporters of the opposition leader, said demonstrator Sebastian Omolo.

“He is not accepting the results and that is why we are on the streets, but police have started shooting,” Omolo said.

Kisumu shopkeeper Festus Odhiambo said he was praying for peace even as protesters blocked roads into city slums with bonfires and boulders.

The contest between President Uhuru Kenyatta, a wealthy 55-year-old businessman, and Odinga, 72, a former political prisoner and son of Kenya’s first vice president, has been a hard-fought election that stoked fears of possible violence.

Odinga rejected the partial results of the presidential polls, saying hackers infiltrated the database of Kenya’s election body to manipulate the “democratic process”.

The opposition leader said that he could not reveal his sources on how he got the information on the alleged hacking.

In a press briefing that took place in the capital Nairobi, the presidential candidate said his party’s results are “completely different” from those published on the election commission website.

Al Jazeera’s Fahmida Miller, reporting from Mombasa, said that Odinga was alleging that important forms have not materialised from the tallying stations.

“Once the votes are tallied and transmitted electronically, these forms are meant to back up exactly how many votes were given to each particular candidate to validate what exactly has gone on,” she said.

Wafula Chebukati, the head of Kenya’s electoral and boundaries commission, said at a news conference: “As a commission we shall have our own investigative system to kick in. We shall come up with a methodology to find out whether or not those claims are correct.”

The roads of the country’s biggest slum in Nairobi, Kibera – an opposition stronghold – remained empty on Wednesday afternoon.

Simeon Otieno, a 33-year-old father of three, stood near his house looking tense.

“Everyone is staying home. Baba [Odinga] asked people to be calm but it is very difficult. We hope he wins but they always changed the result to deny him victory,” Otieno, a labourer, told Al Jazeera.

“This election is the same as 2007. They stole his votes and that caused a lot of problems. I hope nothing happens but we are all tense.” 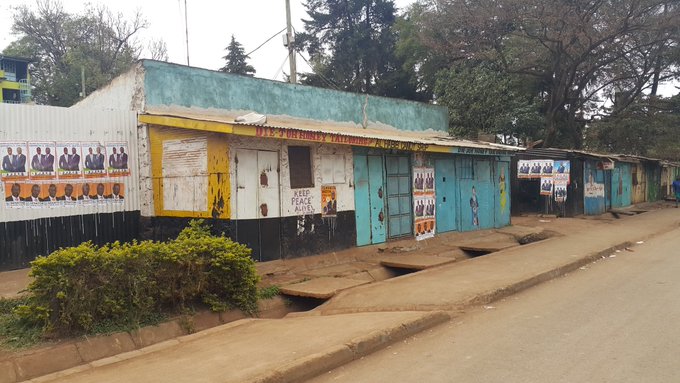 At the other end of the slum, Nancy Odongo sat in front of the shop where she works. The door, however, was locked.

“I hope this ends quickly because we need to go back to work and feed our families,” the mother of two said.

“Elections are always bad news for us poor people. I have to pay bills and feed my children. I don’t care who wins.”

Hussein Ibrahim, another resident of the area, pointed to the long line of shops that were closed.

“There is tension after every election. That’s why all these shops are closed and why no one is coming out of their homes,” Ibrahim said.

“No one is going out because they don’t know what could happen next.”

Raphael Tunju, secretary-general of Kenyatta’s Jubilee party, earlier shrugged off the fraud allegations made by the Odinga camp.

“I don’t expect anything else from NASA,” he said, referring to Odinga’s National Super Alliance party.

“Let’s put it this way – if the results which are being streamed showed that they were leading, what would they be saying now?”

Election officials on Tuesday acknowledged the opposition objection but defended their actions.

During the 2013 polls, Odinga alleged fraud but quelled unrest by taking his complaints to the courts.

This time, the government deployed more than 150,000 security personnel, including wildlife rangers, to protect 41,000 polling stations.