Liz Truss, the justice secretary and lord chancellor, has put out this statement about the judgement.

Our independent judiciary is the cornerstone of the rule of law and is vital to our constitution and our freedoms. The reputation of our judiciary is unrivalled the world over, and our supreme court justices are people of integrity and impartiality.

While we may not always agree with judgments, it is a fundamental part of any thriving democracy that legal process is followed. The government has been clear that it will respect the decision of the court.

After the high court ruled against the government over article 50 last year Truss was widely criticised for failing to speak up for the judges (one of her duties as lord chancellor) after pro-Brexit newspapers denounced them. The Daily Mail famously dubbed them “enemies of the people”.

Labour leader Jeremy Corbyn says his party will not “frustrate” the process for invoking Article 50.

But he said his party would seek to amend the legislation the government has been forced to produce in order to prevent Theresa May allowing the UK to become a “bargain basement tax haven”.

Labour respects the result of the referendum and the will of the British people and will not frustrate the process for invoking Article 50. However, Labour will seek to amend the Article 50 Bill to prevent the Conservatives using Brexit to turn Britain into a bargain basement tax haven off the coast of Europe. Labour will seek to build in the principles of full, tariff-free access to the single market and maintenance of workers’ rights and social and environmental protections. Labour is demanding a plan from the government to ensure it is accountable to Parliament throughout the negotiations and a meaningful vote to ensure the final deal is given parliamentary approval.” 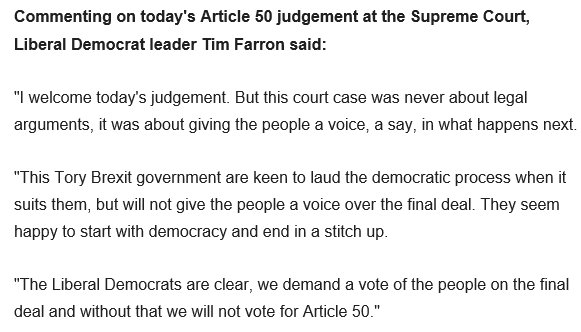 .@timfarron: Liberal Democrats are clear, we demand a vote of the people on the final deal and without that we will not vote for Article 50

How long will it take?

The government wanted to trigger Article 50 using the Royal Prerogative, which is a set of powers that used to be held by the monarch but now reside with government ministers.

That would have meant it could have done so at a time of its choosing and without consulting Parliament at all.

The decision that it must specifically pass a bill is significant. Some other procedures would have meant fewer stages in Parliament and no chance to make amendments.

A full bill means that both houses of Parliament must agree and amendments are possible.

To become an act of Parliament a bill must pass several stages in both the Commons and the Lords. That often takes months of debate, but it doesn’t necessarily have to. Emergency legislation can be passed within a single day if everyone agrees it is urgent.

The bill to trigger Article 50 won’t be that quick, but it needn’t take too long. For one thing, it is likely to be a very short bill with only one or two clauses.

Labour leader Jeremy Corbyn has said that his MPs should not seek to block Article 50. Ken Clarke is expected to be the only Conservative who will vote against it. So the numbers look to be in place to ensure a smooth passage for the bill in the House of Commons.

But more MPs may back attempts to amend the bill, for example, by adding conditions about the sort of Brexit the government should negotiate.

In principle, the House of Lords could be different. The government does not have a majority and many peers remain strongly opposed to Brexit.

However, there is recognition that Parliament voted overwhelmingly to hold a referendum and that the referendum delivered a clear, albeit close, result. Members of the House of Lords, who are not elected, realise that any attempt to frustrate Brexit could be regarded as undemocratic.

0 0 0 0
Previous : “The Human Rights Situation in Burundi Is Deteriorating: We Need a New Approach to Show the World What is Happening”
Next : Trump withdraws US from Trans-Pacific Partnership deal