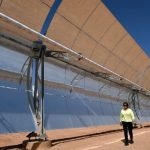 What Africa must do to make green industrialisation a reality

The latest report from the United Nations Economic Commission for Africa features an in-depth examination of green industrialisation opportunities across the continent. The challenge lies in transforming production methods and creating infrastructure to secure food, water and energy supplies.

Africa only plays a small part in environmental degradation. But the continent is extremely vulnerable to climate-related risks. The goal of green industrialisation is to keep Africa’s greenhouse gas emissions low and to mitigate the fallout from climatic change and famines.

The agricultural sector is one of the key players in green industrialisation. So, it’s crucial to implement the Comprehensive Africa Agriculture Development Programme. This will aim to stimulate trade between African countries, boost agricultural products and services, and shore up livelihoods and production systems against climate change and its risks.

These ideas were echoed by AU Commission head Nkosazana Dlamini-Zuma at the 23rd AU summit when she said: “It is time for heads of state to make agriculture a chief national development priority, and open the way to sustainable development for their people. Prosperity is at hand; it is in our hands.”

Green industrialisation could therefore provide the basis for an African renaissance. Shared projects like hydropower stations, roads and smart cities are the first tangible signs of this future federation.

Translated from the French by Alice Heathwood for Fast for Word.