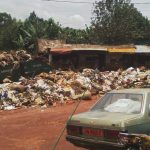 The slumification of Bamenda in the Northwest Province of Cameroon

The tragic deterioration of Bamenda the capital city of the Northwest Province of Cameroon is exemplified by photos circulating on the social media.

The Government Delegate of Bamenda, Ndumu Nji Vincent in the photo above, the Mayors, and politicians should all hang their heads in shame for subjecting the people to a life some describe as worse than hell, substandard housing, squalor, grime, lack and reliable sanitation services, supply of clean water, reliable electricity,  garbage and sludge.

Slums sprout and continue for a combination of demographic, social, economic, and political reasons.

Common causes include rapid rural-to-urban migration, poor planning, economic stagnation and depression, poverty, high unemployment, informal economy, politics, natural disasters and social conflicts. Many people move to urban areas primarily because cities promise more jobs, better schools for poor’s children, and diverse income opportunities than subsistence farming in rural areas. However, some rural migrants may not find jobs immediately because of their lack of skills and the increasingly competitive job markets, which leads to their financial shortage.Many cities, on the other hand, do not provide enough low-cost housing for a large number of rural-urban migrant workers. Some rural-urban migrant workers cannot afford housing in cities and eventually settle down in only affordable slums. Further, rural migrants, mainly lured by higher incomes, continue to flood into cities. They thus expand the existing urban slums

Insufficient financial resources, lack of political will, greed  and lack of coordination and corruption in government bureaucracy and officials are the main causes of what is happening now in Bamenda

No human being should be made to live in conditions like this. I hope the people of Bamenda will rise up and remove those responsible for bringing the city on it’s knees out of office

0 0 0 0
Previous : “One is a burkini, one is a wetsuit – one is illegal, one is legal” Dick Mullen
Next : Usain Bolt has donated all the $20 million he earned from the Rio Olympics to his high school William Knibb Memorial in Falmouth, Jamaica.