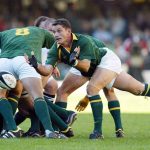 Photo Credit To Joost van der Westhuizen passing the ball from the base of the scrum during a friendly international between South Africa and Scotland. EPA/Kim Ludbrook
Home
Africa

Joost van der Westhuizen, who passed away on February 6 2017 at 45 after a prolonged battle with motor neurone disease, holds a special place in the annals of South African rugby. He was just Joost, one of those sports legends known by his first name – almost like Brazilian football stars.

His status as a rugby legend was etched into stone at the moment the scrumhalf took down the unstoppable Jonah Lomu during the 1995 World Cup Final between South Africa and New Zealand.

At 1.95m and 118kg Lomu was a new type of player with the speed of a wing but the strength and size of a lock forward. The South African public feared that he would run roughshod through the Springbok team. Their fears were about to be realised as he gathered steam on a cool but sunny Highveld winter’s afternoon on the green grass of Ellis Park. But then Joost got in his way. The image of Joost taking down the All Black great who bulldozed through every other team during the competition was one of the defining moments of that game.

The 1995 World Cup in South Africa was a significant historical moment. The competition was about much more than just rugby. The tale of President Nelson Mandela’s political burden is well-known: he had to deal with massive divisions in society after the end of apartheid. This included a deeply suspicious white public that mistrusted the country’s first black president.

The World Cup provided an opportunity to win their trust and build it into a momentous event that people of all colours could celebrate. The competition ended with the iconic image of Mandela handing the Webb Ellis Cup to Francois Pienaar, the captain of the victorious Springbok team.

Joost was part of that historical moment and thus of a special generation of Springbok players who united the South African public, if only for a brief period in 1995. This was a team of players who transcended the game of rugby and brought a sense of national pride to the once parochial – and in many quarters vilified – Springbok jersey.

For some on the field that day the World Cup came towards the end of their rugby careers. But Joost had another two World Cups to go before he hung up his boots in 2003. At the time of his retirement he was the most capped Springbok player and had scored the most tries by a Springbok. He was to be overtaken by the next generation of 2007 World Cup winners.

His career after the 1995 World Cup made him part of another significant generation of rugby players that made the transition from amateurism to the professional era that had started to dramatically shape modern rugby. Joost took part in the first years of Super Rugby between provincial/club teams that spanned the continents of Africa and Australasia and the Tri-Nations series between South Africa, New Zealand and Australia.

He was among the first players who could make a living out of rugby. He nevertheless remained with the provincial team, the Bulls from his hometown Pretoria during his whole career. His sense of loyalty was rooted in the age of amateurism. But he was also one of professional rugby’s first poster boys. This status had its burden as his life in the public eye was the stuff of sensation, which put increasing strain on him and his family.

He married singer Amor Vittone – and as one obituary put it “they became the local version of David Beckham and Posh Spice”. After a sex video showed him taking drugs with a stripper his life was often featured in salacious details on the front page of newspapers instead of the sports pages. Joost admitted:

When you achieve and achieve and you don’t know how to cope with that, and everything revolves around you … that’s when you make negative mistakes.

Yet Joost was a national hero because he was part of a generation of players that most people in the country idolised.

It was also a matter of timing. By the time he was reaching the peak of his career South Africa had become a democracy and its sportspeople were free to compete internationally.

Before that, a successful sports boycott – from the early 1960s to the early 1990s – had been in place as part of the isolation of apartheid. The subsequent dearth of international rugby games led to the elevation of the local provincial competition. A deep sense of provincialism took hold during this era and players from the capital city’s Bulls were viewed with hatred by fans from other teams.

This provincialism is still evident, even two decades into the professional era. But some national players transcended the parochialism. Joost was foremost among them. His bravery and sheer skill was appreciated and praised even by fans of other local franchises, whether he played for the Springboks or the Bulls.

In this sense, he transcended the game because his brand of rugby was the beautiful game that captivated both friend and foe, in South Africa and abroad.

Joost’s transcendence of the game of rugby became most apparent in the final chapter of his life. He was diagnosed with motor neurone disease in 2011 and confined to a wheelchair as the symptoms became more progressive. Yet, despite his immobility at such a young age, he remained active in the public eye in raising awareness about the disease through his J9 Foundation.

The disease sadly makes him part of another generation of players whose professional career of long seasons with countless tackles and collisions takes its toll not long beyond retirement. Through his advocacy and humble modesty beyond the game, he transcended not only the game of rugby but also life itself. He was a rugby warrior for the ages.