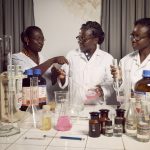 How Africa can empower more women to become leaders in science

A woman’s place is in the home. Her “job” is to marry and to raise children. This thinking still prevails in most parts of the world – and it is one of the major reasons that only about 30% of women in sub-Saharan Africa are working in research and development.

The good news is that several African countries are creating an environment that allows women to pursue their passion for scientific research and development. These initiatives offer valuable insights into how more women can be drawn into science and work their way up the ladder to become leaders in science, technology, mathematics and engineering. This process involves many parts of a society: governments, educational systems, universities, civil society organisations, women themselves and, crucially, men.

From scholarships and science fairs, to policy changes and high-profile appointments, these countries – Morocco, Egypt, Angola, Nigeria and Mauritius – are leading the way to create room for women scientists.

To understand what’s currently holding women back from becoming scientists, we examined the Gender, Institutions and Development Database that’s been established by the Organisation for Economic Cooperation and Development’s Development Centre to find some answers.

For starters, girls simply aren’t receiving as much formal education as boys. Girls all over the continent are far less likely to complete primary school than boys are. This is one of the major failings of the Millennium Development Goals, which aimed to achieve universal primary education by 2015.

One of the problems is that girls’ education is often not considered important. Social and cultural norms dictate that women should fulfil the traditional roles of wife and mother rather than concentrate on school work and further education. A 2013 study found that families very rarely encourage their daughters’ interest in science. Most African women who decide to study science after school cite personal interest as their major motivation. Only 1% of the study’s respondents said their parents had been their major motivator in this regard.

Even when girls do make it to university to study science, they struggle to remain in their field after graduation or to become science leaders. In Morocco, for instance, the number of women graduating from science programmes is high. But only 25% of teaching staff in the country’s universities are women and women deans are rare in the sciences. Only about 32% of Angola’s active researchers are women and research projects headed by women are almost non-existent.

There are a few African countries that are working actively to buck these trends. Egypt has long been a trendsetter, starting with Queen Nefertari thousands of years ago. She was hailed for her intellect and was highly educated.

Today, Egyptian women are well represented in universities’ science departments and faculties. This has long been the case. In lead author Professor Bassioni’s family, for instance, her mother headed the National Heart Institute’s department of anaesthesia for more than 20 years; today Professor Bassioni is head of the faculty’s chemistry division. Her current boss and the previous dean of the faculty of engineering are also women.

Morocco is another country with a rich tradition of women as academic leaders. One of the world’s oldest continually operating universities, Al Qarawiyyine in Fez, was founded by a woman named Fatima al-Fihri in 859. Today, analysing the government’s own statistics shows that 56% of all Morocco’s first-year science, technology, engineering and maths students are women. The figure is as high as 74% in medical studies. Almost half of the PhDs defended each year belong to women. More work needs to be done in retaining these women as working scientists, but the numbers are a positive start.

Mauritius has taken its quest to draw women into science to the nation’s highest office: the country is led by a world renowned woman scientist, Her Eminence Professor Ameenah Gurib-Fakim.

Angola’s National Development Plan 2012-2017 specifically addresses the issue of women in science. Policymakers, working with the Ministry of Family and Promotion of Women, have set up programmes to motivate women’s interest in areas like medicine and science. Examples include the annual Scientific Week of Women, and science and technology career fairs at public schools. The ministry has set up a small grant fellowship programme to help girls from poor families with exceptional grades to enrol for science degrees.

To build on these countries’ excellent work, we’ve established a programme that we hope will further drive a paradigm shift in the continent’s attitudes. We are a group of African scientists who all hold leadership positions in our respective countries and want to share our lessons with others. One of our major aims is to lift the veil on what can sometimes be considered a mysterious world – that of the sciences – and to offer women the support they need to juggle societal expectations, their family commitments and fulfilling careers as scientists.

We built the African Women in Leadership Life (or African WILL) group during the April 2016 meeting of the Africa Science Leadership Programme in South Africa.

We believe that African societies’ perceptions will only shift if the whole family is included in the process of developing women. This cannot be something that girls or women pursue in isolation. To this end, our group has begun identifying barriers and taboos that should be overcome to empower women in leadership roles. We’re planning basic programmes geared towards family planning, maternal health services and girls’ education at community centres in Angola, Egypt, Mauritius, Morocco and Nigeria. These are aimed at entire families: boys, girls, men and women. It is crucial that mothers, fathers and extended families understand how much everybody benefits when women are educated and empowered.

On the flip side of this, African WILL plans to offer workshops, lectures and seminars that help women who are already at university or in careers to balance the demands of work, education, personal progress and family.

0 0 0 0
Previous : Novel use of satellite data is helping Africa cope with natural disasters
Next : What the science and technology index tells us about development in Africa