Former Egyptian President Hosni Mubarak has been released from jail, six years after being overthrown after  after the Arab Spring uprisings that swept through North Africa

He left the Maadi military hospital on Friday morning and returned to his home, where he had breakfast with his family and a number of friends, according to a report in the privately owned newspaper al-Masy al-Youm. His lawyer, Farid al-Deeb, told the paper that Mubarak thanked those who had supported him throughout his trial.

The strongman, who ruled Egypt for nearly three decades, often appeared in a frail state during his court appearances, attending on a stretcher and wearing dark sunglasses, but the appearances put paid to repeated rumours of his death. 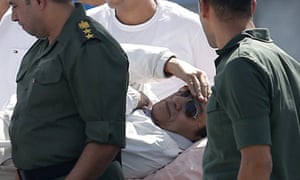 He was ordered for release earlier this month after Egypt’s top appeals court cleared him over the deaths of protesters in the 2011 uprising.

He had been at Maadi Military Hospital since 2013, when he was transferred there on bail from Torah prison.

Mr Mubarak was sentenced to life in prison after being convicted in 2012 of complicity in the killing of protesters who died at the hands of security forces in February, 2011.

Another trial was held and a judge decreed in May 2015 that Mr Mubarak could be released from detention.

However, the government of President Abdul Fattah al-Sisi was reportedly reluctant to free him because of the public backlash that might accompany such a move.

In all, more than 800 people are believed to have been killed as security forces clashed with protesters in Cairo, Alexandria, Suez and other cities around Egypt during the 18-day uprising that forced Mr Mubarak to resign.