Photo Credit To A ‘Global Britain’ may be difficult to achieve. Facundo Arrizabalaga
Home
Current Affairs and Politics

Dear Theresa May: if you want partnership, there’s nothing better than EU membership

UK Prime Minister Theresa May has finally begun to elaborate on what she means by her mantra “Brexit means Brexit”. In a historic speech in London, May set out her 12-point plan for leaving the union.

The trade-offs are becoming much clearer. In essence, the UK government proposes to privilege border control over the economy. May’s utopian vision of the UK’s future is that of a “Global Britain” committed to free trade, back in control of its laws and institutions, free of the fetters of EU membership.

All of this wrapped up in delivering a brighter future for the UK’s children despite the fact that young people voted overwhelmingly to remain as part of the EU.

The speech was intended for many audiences, among them the UK public, EU citizens living in Britain, her party, Westminster, the 27 EU countries with whom she will have to negotiate. It will find most favour with those who want a clean break from the EU and the hardcore of the Conservative party and the UK Independence Party.

Not only has May signalled a departure from the single market, but also the customs union, because she and her government wish to privilege the freedom to negotiate bilateral trade agreements with the rest of the world.

Scotland, where 62% of people voted to remain in the EU, will experience a deep wrench with the loss of EU membership and it could well strengthen support for full independence.

Theresa May effectively ruled out (again) special status for Scotland, meaning it’s now #indyref2 or her version of Brexit

In Northern Ireland, which is experiencing a political crisis of its own, Brexit will do nothing less than endanger the fragile peace that has been crafted from the Good Friday Agreement.

Brexit has been a harsh reminder for these places that UK politics remains dominated and controlled by the metropolitan English.

The view from Europe

Of course, a crucial audience for May is the EU27 and Europe’s collective institutions, which are awaiting the triggering of Article 50 that will begin the Brexit process.

How are they likely to respond to the speech? I would suggest that the EU27 will adopt a measured collective response to UK demands; there will be no divide and conquer. The UK is unlikely to drive a wedge among the member states because they all have a vital interest in a robust and resilient union. They are acutely aware of the present dangers, which, of course, are accentuated by the imminent arrival of US President Donald Trump.

They will proceed with the negotiations in a systematic and orderly manner; the EU is hardwired to negotiate.

The European Council and Commission Task Forces are waiting. The exclusion of the single market and the customs union option will clarify the boundaries of negotiations. May’s demand for an “equal partnership” will be met with bemusement given that the spirit of membership is infused with the values of equal partnership. If you want partnership, there is nothing better than membership. 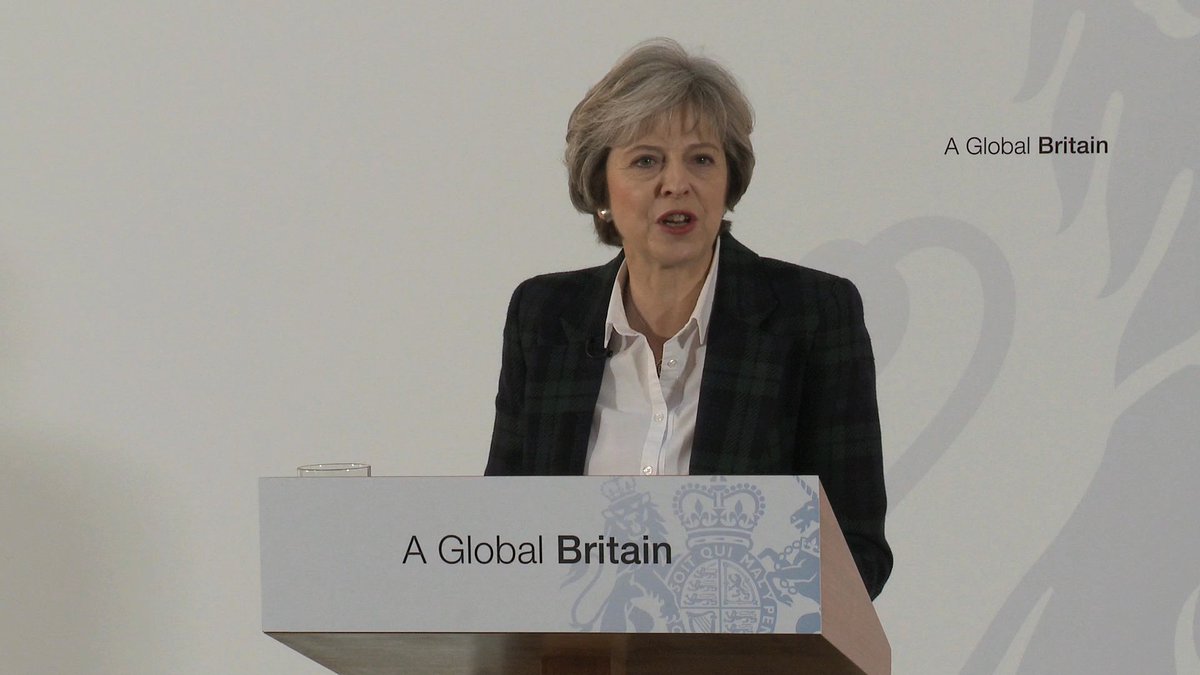 PM: I want Britain to be what we have the potential, talent and ambition to be – a great, global trading nation http://www.gov.uk/government/speeches/the-governments-negotiating-objectives-for-exiting-the-eu-pm-speech …

May’s reference to the EU’s incapacity to manage diversity will be met with puzzlement given that the UK has been given so many opt-outs over the years, from using the Euro currency to being part of the border-free Schengen agreement. Her rather ambiguous reference to a future customs agreement with the union will not pass a WTO rules test.

The wrong side of the table

In the end, this will be a negotiation between one country and 27 others. The population of the UK is just over 65 million; the remaining member states constitute a market of 435 million.

Scale matters in trade negotiations; the hard facts are that in 2016, 44% of UK trade in goods and services went to the rest of the EU, and 53% of its imports originated from the EU27. There is a mismatch of power which the UK government will find difficult to adjust to.

Having a seat at the table is very different to being on the other side of it. There was remarkably little in May’s speech concerning the economic cost to the UK. To disguise this absence, the speech was infused with references to the economic potential of all the trade agreements that this new bright Global Britain will forge with the rest of the world.

But May has no way of knowing if this will compensate for the losses in the EU27 market and it will be extremely difficult to negotiate these agreements in a reasonable time frame.

Theresa May has set the scene for Brexit, now it is over to the union’s formidable negotiation machinery. Unfortunately for Britain, the EU will be in the driving seat.