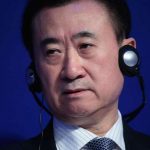 The Chinese billionaire joined a chorus of concern from international business chiefs gathered at the World Economic Forum in Davos, Switzerland, this week over the protectionist leanings of the US President-elect, who takes office on Friday.

Mr Wang, whose Wanda conglomerate owns a US cinema chain, a Hollywood production company and the firm that runs the Golden Globe awards, said America would be the bigger loser if the entertainment sector fell victim to a trade war.

“The main growth market of English-language films out of the US is actually China, not anywhere else,” Mr Wang told an audience in Davos, noting that China had the most movie screens in the world with 15,000 added in the past year alone.

“If China were to retaliate, it would be bad for both parties so I don’t wish to see that scenario materialising.”

Chinese President Xi Jinping has led calls in Davos for an open global economy as Mr Trump prepares to take power, warning on Tuesday: “No one will emerge as a winner in a trade war.” Mr Wang said last month that the jobs of his 20,000 US employees would be on the line if the Trump administration mishandled Chinese investment.

The 62-year-old acknowledged US political concerns over his acquisitions, which include the US$2.6 billion purchase of cinema chain AMC in 2012 and Legendary Entertainment, the company behind the “Batman” trilogy, for US$3.5 billion (S$5 billion) last year.

Several US lawmakers have urged the government to examine the national security implications of such investments in Hollywood, if such Chinese “soft power” is allowed to take root.

As China eyes a growing stake in US movie-making, Internet billionaire Jack Ma also expressed an interest in further Hollywood investment on Wednesday after his company Alibaba bought a stake in Steven Spielberg’s firm last year.

“I think we should partner with Hollywood,” he said as he too held court at Davos.

Mr Wang, who has been talked of as a potential buyer of Paramount Pictures, reiterated his interest in buying one of the “big six” Hollywood companies.

“These six companies are not in a selling mood,” he said, adding that if they were, “I would be a happy buyer”.

Mr Wang said both China and the US would benefit from more joint movie productions, as these are exempt from Beijing’s tight limits on the screening of foreign blockbusters.

Only 34 foreign films are allowed cinema releases in China each year, limiting Hollywood studios’ ability to cash in on a massive potential audience – but “there’s no limit” on co-productions, Mr Wang pointed out.

Legendary’s The Great Wall, a monster movie starring Matt Damon, has been billed as the first such blockbuster jointly made by China and the US.

Damon, in Davos to promote his water charity, told AFP he would work on another Chinese project “in a heartbeat”.

“I didn’t feel there was any propaganda to it at all,” he said of the concerns of some US politicians.

“It was a good old-fashioned creature feature with a giant international crew, and that was a cool thing to be a part of.”

Given the growing clout of Chinese movie-goers, Mr Wang advised Hollywood studios to start thinking more about the kind of movies his compatriots want to see.

“Chinese films tend to talk about emotions, relationships with people,” he said.

“If Hollywood wants to take up a large market share, they need to learn to cater to Chinese tastes – not just these films about superheroes.”

But Alibaba’s Jack Ma said Chinese cinema could learn from American storylines – notably, how to cheer up.

“In Chinese movies, the hero always (ends up) dead,” he complained, to laughter from the Davos crowd.