The five-man shortlist of Pierre-Emerick Aubameyang, Naby Keita, Sadio Mane, Victor Moses and Mohamed Salah has been revealed and voting for the BBC African Footballer of the Year 2017.

Profiles the men in the running for the honour:

Not once in the long history of the Bundesliga had an African ever topped the league’s scoring charts outright until Pierre-Emerick Aubameyang hit 31 goals in 2016-17.

The tally not only enabled the Gabon international to eclipse the feats of Ghanaian Tony Yeboah, who twice finished joint top scorer in the 1990s, but also become only the fourth man to net over 30 goals in Germany’s top flight – and the first in 40 years.

Equally impressive was the fact the Dortmund star’s 31 goals came from just 32 games, as a player with blistering pace and a poacher’s nose earned his place in the Bundesliga’s team of the year for the second year running.

A Champions League hat-trick against Benfica in March helped him to hit 40 goals overall, one of which won the German Cup final as Dortmund beat Eintracht Frankfurt 2-1.

Aubameyang’s form was so good he was nominated for Fifa’s Best Player of the Year award – the only African to receive such an accolade – while the 28-year-old was joined by fellow BBC African Footballer of the Year nominee Sadio Mane on the Ballon d’Or shortlist.

Despite widespread expectations the flamboyant, fashion-loving Gabonese would leave Dortmund in the off-season, no move materialised.

Clubs of the stature of Paris St-Germain and Manchester City showed interest but his long-held and very public dream of joining Real Madrid faded when the Spaniards overlooked him despite his incredible scoring form.

‘Auba’ picked up the new campaign where he left off the last – using his endless movement and eye for goal to strike eight times in the league’s first six games.

Internationally, the Gabon captain had a year to forget as his country became only the fourth Africa Cup of Nations hosts to exit in the group stage, despite his two goals in three games. 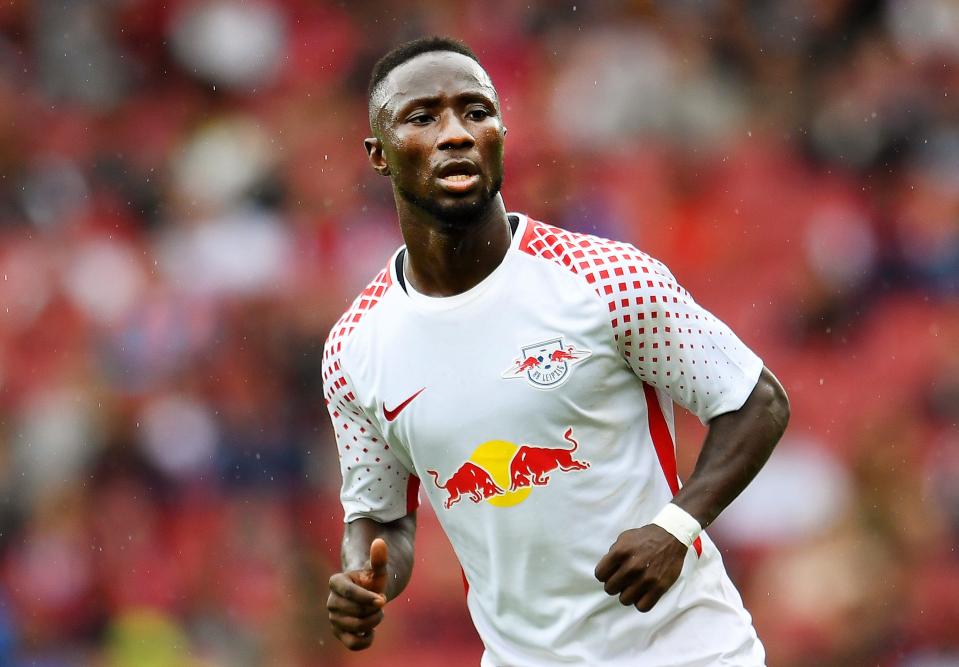 Naby Keita may have started the 2016-17 season as an unknown but he ended it with his name in the Bundesliga’s team of the year – a public poll in which the 22-year-old received the most votes of any midfielder.

RB Leipzig were certainly the surprise package of last season – the Bundesliga debutants finishing in second place – but their Guinean midfielder ran them close.

Just five minutes into his league debut, Keita – an unheralded purchase from Leipzig’s Austrian sister club RB Salzburg – scored an 89th-minute winner against Borussia Dortmund to set the tone for the season.

In total, he netted eight league goals – among them a goal of the season contender – while also providing seven assists.

But it is Keita’s all-round game that truly impresses. A box-to-box midfielder who is damaging at both ends of the pitch, he has been described by an opponent as being like “two players”.

The fleet-footed Keita is a player most coaches would love to field.

An expert at breaking up play, he also has the physical power and vision to then drive past opponents – he registered more dribbles than Bayern Munich winger Arjen Robben in Germany’s top flight last season – to either score goals or make them.

It is little wonder his manager at Leipzig described him as “indispensable” and his talent as “just insane”.

The Conakry-born star impressed so much that Liverpool agreed an African record transfer fee of at least £48m to secure his services in July 2018 – with Leipzig later saying they would not have sold him but for the triggering of his release clause.

Keita is primarily on the list for his club exploits because Guinea found the road to the 2018 World Cup in Russia too tough, even if the midfielder did score in qualifiers against Libya and Tunisia. 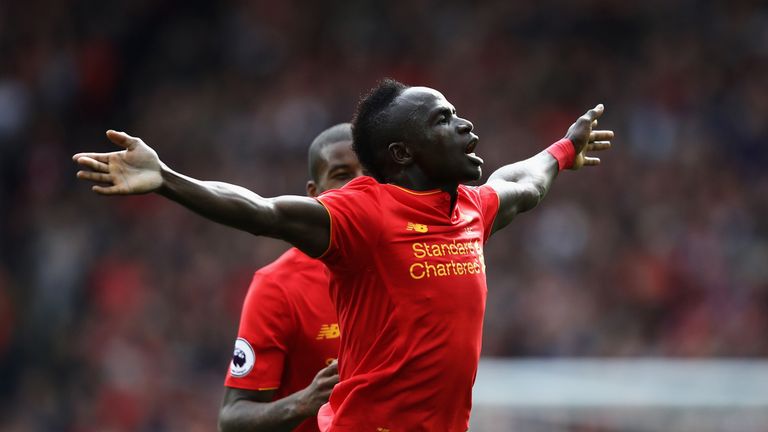 Senegal and Liverpool forward Sadio Mane performed so well in 2017 he was not only voted by his fellow professionals onto the PFA team of the year but he was also one of just two Africans to make the Ballon d’Or shortlist.

He also shone as Senegal reached their first World Cup since 2002. A clinical victory over South Africa at the Peter Mokaba Stadium in Polokwane sealed their place in Russia, with Mane key to the Teranga Lions’ victory with both assists in a 2-0 win.

In his best goalscoring return for Senegal in a calendar year, Mane struck four times in nine internationals.

It was all a far cry from the beginning of the year as Mane displayed a resilience to match his searing pace, trickery and finishing prowess.

For after an initial blaze of optimism – scoring in Senegal’s first two group games at the Africa Cup of Nations – Mane’s year took a bitter twist.

His decisive miss in the quarter-final penalty shootout against eventual champions Cameroon reduced Mane to a crumpled, distraught figure.

So how Liverpool were grateful for the way in which the steely Senegalese responded, for they had won just once without him in a seven-game spell in which they had exited both domestic cup competitions.

He duly inspired the Reds’ first league win since his departure for Gabon when scoring twice in a 2-0 victory over high-flying Spurs, before also netting in vital wins over Arsenal and rivals Everton, against whom Mane scored in home and away wins.

He ended the season with 13 goals – his best Premier League tally – despite missing nearly all of April and May after having knee surgery.

Mane finished his debut Liverpool campaign as the club’s joint top scorer – sharing that honour with Philippe Coutinho despite playing fewer games – and helped the Reds qualify for the Champions League with only their second top-four Premier League finish in eight years.

By the time of his disputed red card against Manchester City in September in the new domestic campaign – which he started with three goals in three games – Liverpool were averaging 2.2 league goals with Mane in the team compared with 1.6 without.

The 25-year-old is hoping to cap his year by winning his first BBC African Footballer of the Year title at the third time of asking. 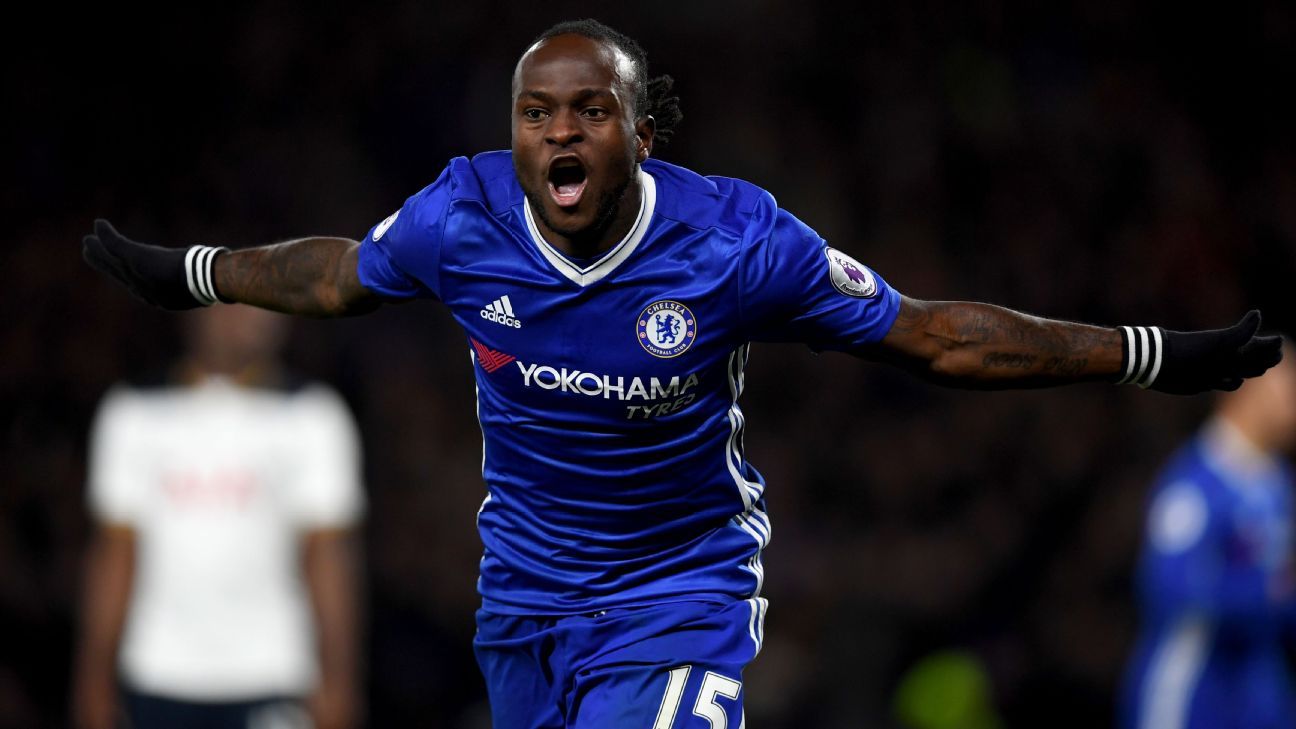 When Victor Moses looks back on his career, the Nigeria and Chelsea midfielder is more than likely to see the 2016-17 season as a major turning point.

After years of loan moves, the 26-year-old finally cemented his role at Stamford Bridge – so much so that he became an integral member of their Premier League-winning team.

The date Moses might look back on is 1 October when Chelsea coach Antonio Conte, following comprehensive defeats by Arsenal and Liverpool, switched to a 3-4-3 system and fielded Moses in an unfamiliar right wing-back role at Hull City.

It was his first league start for the Blues in over three years but Moses was far from overawed – producing a man-of-the-match display with his natural attacking instincts and desire to track back.

The Hull victory was the start of a record-equalling 13 consecutive Premier League wins for Chelsea and 22 consecutive league starts for Moses, until he briefly succumbed to injury in April.

The previous month, the onetime drifter had anchored himself to the Blues by signing a new contract – completing his remarkable turn of fortune at a club he joined in 2012.

While this was largely down to Conte giving Moses a new lease of life by seeing something in pre-season that others never had, the 26-year-old still had to take his chance and – in one of the season’s least expected narratives – he fully did so via stamina, strength and speed.

As well as winning the Premier League, Moses also received an FA Cup runners-up medal after Chelsea lost to Arsenal in a final where the Nigerian tinged his successful campaign with a red card.

Moses played only three internationals this year, but in his first he scored in a sensational 4-0 destruction of Cameroon that knocked the African champions out of qualifying and smoothed Nigeria’s eventual passage to a third straight World Cup.

Now Moses could become the first Nigerian since Jay-Jay Okocha in 2004 to win the BBC award. 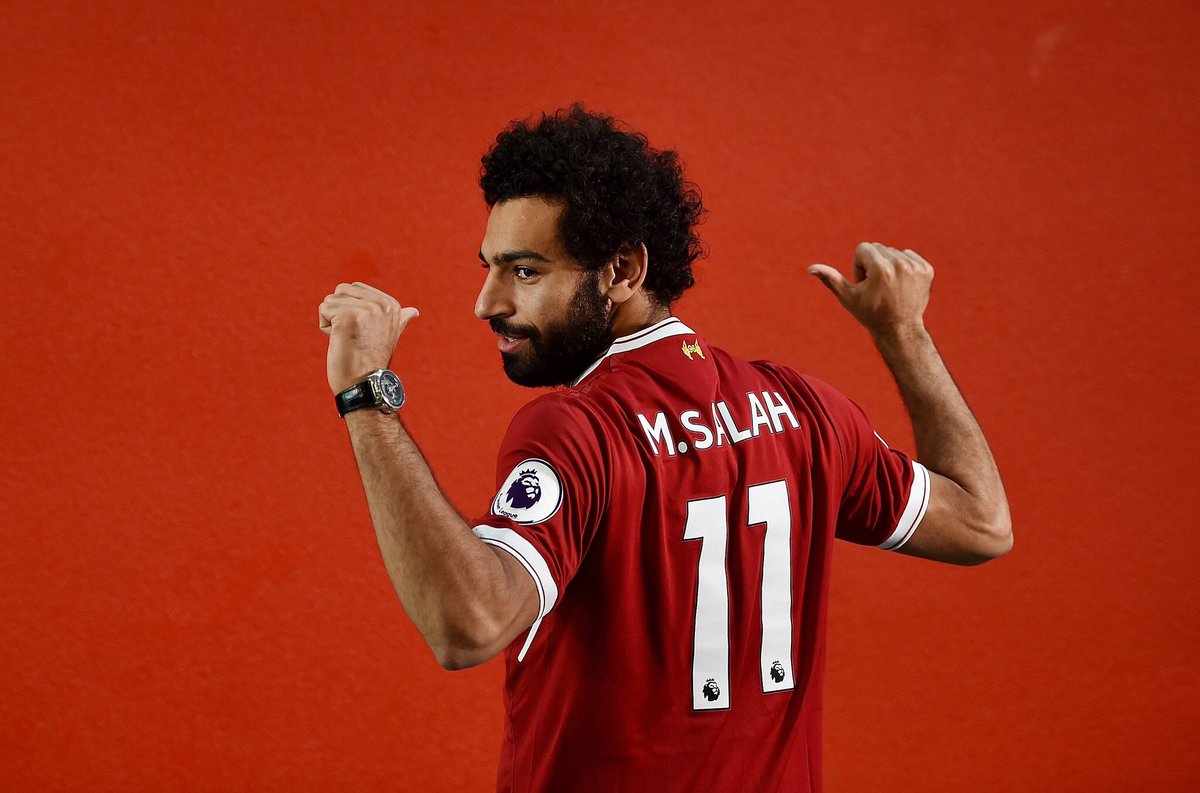 Mohamed Salah may have scored over a century of goals but he will forever be remembered in Egypt for just one – the late strike against Congo in October that took the Pharaohs to their first World Cup in over a quarter of a century.

Egypt – African champions a record seven times – had not reached a World Cup since 1990, but Salah was given the chance to seal their place in Russia from the penalty spot deep into stoppage time with the score at 1-1.

The 25-year-old somehow ignored the crackling fever to slam home, sparking nationwide euphoria and prompting President Abdul Fattah Al-Sisi to praise the forward’s ability to handle the pressure of over 80 million expectant Egyptians.

The goal cemented his reign as King of the Pharaohs in 2017, with the team nicknamed ‘Salah’s Egypt’ thanks to the winger often inspiring a limited side to the top.

He was equally impressive at the 2017 Africa Cup of Nations, where he earned a place in the team of the tournament after having a hand in four of Egypt’s five goals – scoring twice – as the North Africans finished runners-up to Cameroon.

Salah’s outstanding form has not been restricted to internationals.

After joining Liverpool from Roma in June, the start to his Anfield career could scarcely have gone better as he was named the club’s player of the month in August and September.

A goal on his debut helped him rack up seven goals in his first 11 Premier League games, and he has fared even better in the Champions League, with five goals in six games.

Salah’s superb start in England was a continuation of his fine form in Italy, where the diminutive player was a key figure in Roma’s best league placing in seven years.

He scored 15 times and provided 11 assists in a league famed for its defending as Roma finished second, trailing champions Juventus by just four points.

This is the first time Salah has been nominated for BBC African Footballer of the Year and he would be the first Egyptian to win it since the legendary Mohamed Aboutrika in 2008.