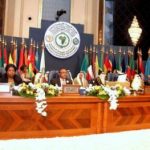 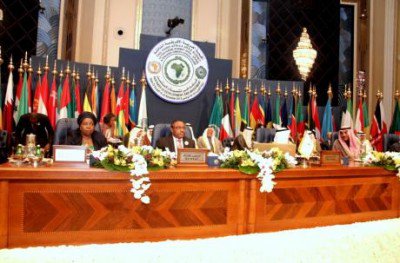 A fourth gathering of the African-Arab Summit met on November 23 in Malabo, Equatorial Guinea to discuss avenues of mutual cooperation and benefit to the neighboring regions throughout the continent and West Asia.

African Union (AU) Commission Chairperson Dr. Nkosazana Dlamini-Zuma, held a preliminary meeting on November 4 with Mohammed Abou Alhassan, Representative and Special Advisor of the Emir of Kuwait. The discussion took place at the headquarters of the Pan-African bloc in Ethiopia’s capital Addis Ababa.

In comments made to the media at the AU conference center, Dlamini-Zuma praised the role of the summit which she said was facilitating the inter-regional cooperation in various fields. The Kingdom of Kuwait both hosted and chaired the 3rd summit in 2013, under the theme “Partners in Development and Investment.” (Xinhua, Nov. 4)

Dlamini-Zuma emphasized that within “the context of agenda 2063, Afro-Arab cooperation and bilateral cooperation between Kuwait and African member states focus on areas including scientific research, food security, trade and investment, infrastructure development, and enhancing the role of women in development.”

This year’s meeting was organized under the theme “Together for sustainable development and economic cooperation,” the AU Chair said.

The gathering was co-sponsored by the AU and the League of Arab States. President Tedoro Obiang Nguema Mbasogo of Equatorial Guinea hosted the summit.

By its conclusion the summit decided to transfer control of the Co-Chairmanship of the Summit to Highness Sheikh Sabah Al-Ahmad Al-Jaber Al-Sabah, Amir of the State of Kuwait and Co-Chair of the 3rd Africa-Arab Summit, to H.E. President Mohamed Ould Abdel Aziz, President of the Islamic Republics of Mauritania; for the Arab side, even though Mauritania is in North Africa. On the ostensible African side, President Idriss Déby Itno, of Chad assumed control from Ethiopia’s Prime Minister, Hailemariam Dessalegn, as Co-chairperson of the 3rd Africa-Arab Summit.

The previous African-Arab Summit was held in Kuwait in November 2013. The meeting pledged to enhance cooperation in the areas of infrastructural development, food security and agricultural development.

In deliberations during the 3rd Summit the conference adopted a partnership program based upon a joint plan of action. The 2013 gathering was held just three years since the 2010 2nd Summit which convened in Sirte, Libya.

This was just several months prior to the counter-revolution in the North African state which was bombed extensively from March 19, 2011 until October 31 of the same year by the Pentagon, NATO and its regional allies. Today Libya remains a major source of instability throughout North and West Africa spreading across the Mediterranean and into Southern, Central and Eastern Europe.

Unfortunately, several key Arab states in the Gulf region and North Africa supported and participated in the destruction of Libya. Syria and Algeria, two governments with a history of anti-imperialist and national liberation politics, voted against the Arab League decision to endorse the UN Security Council Resolutions 1970 and 1973 which resulted in an arms embargo against Tripoli then under the leadership of Col. Muammar Gaddafi as well as the imposition of a so-called “no-fly zone” allowing for the blanket bombing of the country of Libya that killed up to 100,000 and displaced several million.

Those states designated as African and Arab respectively assessed progress made in the three years since, and deliberated on how to strengthen their cooperation in ways that would live up to the expectations of their citizens in terms of socio-cultural and economic development based on the principles of equality, mutual interest and respect.

In 2013, the summit issued the “Kuwait Declaration” which called for a collective approach aimed at promoting cooperation in the political, economic and socio-cultural fields between the Arab and African nations in part to resolve disputes and violence in the two regions.

Nonetheless, the concrete conditions on the continent and in West Asia has worsened since 2013 with the Mediterranean migrant crisis marked by the deaths of thousands over the last two years due to wars of regime-change and the economic crisis spurred on by the precipitous decline in energy and other commodity prices.

Problems in Inter-regional Relations within the Context of Imperialism

Although these states which met in Malabo are ostensibly independent, there are remaining issues related to neo-colonialism and domination by Western powers. The failure of the League of Arab States to halt the war in Syria and foster the stabilization of Libya, along with the AU and other inter-regional territories, speaks volumes related to veracity of these institutions.

AU Chair Dlamini-Zuma implored the heads-of-state and foreign ministers to work together on questions which can benefit both regions. She stated: “In our engagements, the priority lies in working together withpartners to ensure the joint implementation of Agenda 2063 and the Sustainable Development Goals, which are pivotal to regional transformation.” (AU-Int, Nov. 23)

Dlamini- Zuma spoke favorably of the programs and activities of the two regions during the last four decades, when the first summit was held in 1977 in Cairo, Egypt. Yet, the historical trajectory in Africa and West Asia since the late 1970s has witnessed deeper imperialist interventions by the U.S. and other Western states.

President Robert Mugabe of the Republic of Zimbabwe attended the 4th African-Arab Summit and addressed the delegates saying:

“It is my fervent hope that the Africa-Arab Cooperation can, and should be utilized, as an instrument to enhance trade and investment. This relationship should be taken to higher levels that reflect the strong cultural ties, the geographical proximity and the tremendous potential that exists within and between our two regions.” (Zimbabwe Herald, Nov. 24)

Zimbabwe, which says it has benefitted from the declarations of the 3rd Summit held in Kuwait through a $35 million citrus farming project slated to be created in Matabeleland South along with the building of two new hospitals by the Ministry of Health and Child Care, suggested that an alliance between African and Arab states could transform the world economy. Nonetheless, the former leader of the AU undergirded his comments in recognition of the present crises inherited from imperialist domination.

Mugabe stressed that: “The unbalanced North/South cooperation, an extension of the colonial system, has demonstrated repeated failures, especially for less privileged countries of the South. They have simply tagged along, and only ‘developed’ along the dictates of the wealthy northerners. For the countries of the South, the economic pattern has been the continuous export of primary products and raw materials to feed the insatiable industrial needs of the northerners.”

Another major problem facing the African-Arab 4th Summit was the withdrawal of the Kingdom of Morocco in protest of the recognition of the Saharawi Arab Democratic Republic (SADR) which is a member by the AU. Morocco which has rejoined the AU after an absence of more than three decades is still in opposition to a plebiscite on the independence of the Western Sahara occupied by its military forces and political institutions. A report published by Press TV claimed “Saudi Arabia, the United Arab Emirates, Bahrain, Qatar, Oman, Jordan and Yemen as well as Somalia also left the one-day summit.” (Nov. 23)

Zimbabwe  Foreign Affairs Minister Simbarashe Mumbengegwi said the matter was later resolved at the Heads of States level: “The drama relating to Morocco’s objection in relation to the presence of a flag and a plaque of the Saharawi Republic took place during the meetings at the Ministerial level. The stand-off led to a delay in the start of the meeting by up to seven hours and it only resumed after the Co-Chairs insisted that Morocco’s concerns would be heard.” (Zimbabwe Herald, Nov. 24)

Mumbengegwi went on to note: “When it came to the Heads of State level, it was agreed that on the African side, everyone is entitled to attend all partnership meetings and that point was not negotiable and in the end nobody raised it. There was no walkout as what happened during the Ministerial meetings.”

0 0 0 0
Previous : The Dollarization and Militarization of Africa
Next : Britain’s Scramble for Africa: The New Colonialism