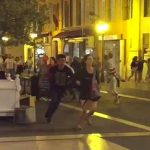 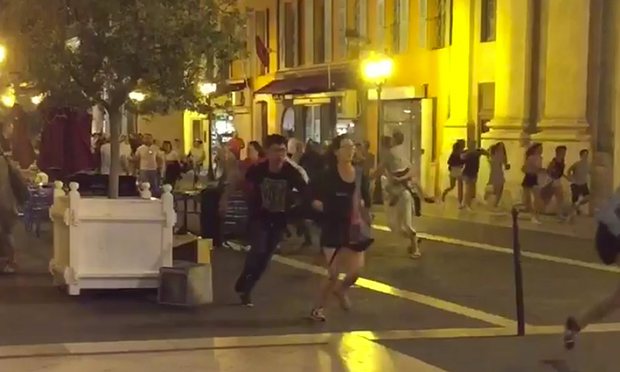 France’s national holiday turned bloody and violent Thursday night in the southern city of Nice, as a truck drove through crowds of Bastille Day revelers and gunmen attacked several tourist haunts throughout the city.

In this video grab taken Thursday July 14, 2016, ambulances and Police cars are seen after a truck drove on to the sidewalk and plowed through a crowd of revelers whod gathered to watch the fireworks in the French resort city of Nice. Officials and eyewitnesses described as a deliberate attack. There appeared to be many casualties. (BFMTV via AP)

The French Interior Ministry told reporters that at least 60 people were killed, and reports from Nice described a lengthy drive on pavements, not merely a crash into a building.

Sebastian Humbert, prefect for the Alpes-Martime area said: “A truck rammed into the crowd over a long distance, which explains this extremely heavy toll.”

The scene in Nice where it is alleged a truck or lorry drove into a crowd. Photograph: @Admitonesin
The driver was reported killed in an ensuing gunfight but a second gunman escaped. There were also reports of attacks on a downtown Nice hotel and its attached restaurant.

A manhunt was in progress early Friday local time, as the national police force told Nice residents that “Emergency operation in progress. Keep calm and avoid downtown area. Follow the official accounts to be informed.”

Wassim Bouhlel told the Associated Press in Nice that he saw a truck ram through the crowd before the driver exited wielding a gun and firing at random.

The French president is heading to the interior ministry’s crisis centre, Reuters reports.

The French presidency said on its Twitter feed that the government had activated the inter-ministerial crisis centre following the incident in Nice.

Maryam Violet, an Iranian journalist visiting Nice on holiday, told the Guardian that she saw the lorry running over people as they walked in the pedestrian area after the fireworks had finished.

“Everyone was completely shocked, I saw that suddenly people were fleeing and shouting,” she said over the phone from Nice.

“I was walking for nearly a mile and that there were dead bodies over the place. I think over 30 dead bodies are on the ground and lots of people are injured.”

The bodies had been covered by blue sheets.

“I saw two sisters and one brother from Poland that were mourning the death of their two other siblings,” she told the Guardian.

“The youngest one was crying and the other two just didn’t know how to react.

“There were so many Muslim people who were victims because I could see they had scarves over their head and some were speaking Arabic. One family lost a mother and in Arabic they were saying she’s a martyr,” she said.

“People were celebrating and it was so peaceful, it was a festivity vibe, it was right after the fireworks that the truck came and ran over people.”

Donald Trump has been quick to deliver his take.